Visualizing the $2.9B Money Flow into Gold Exploration 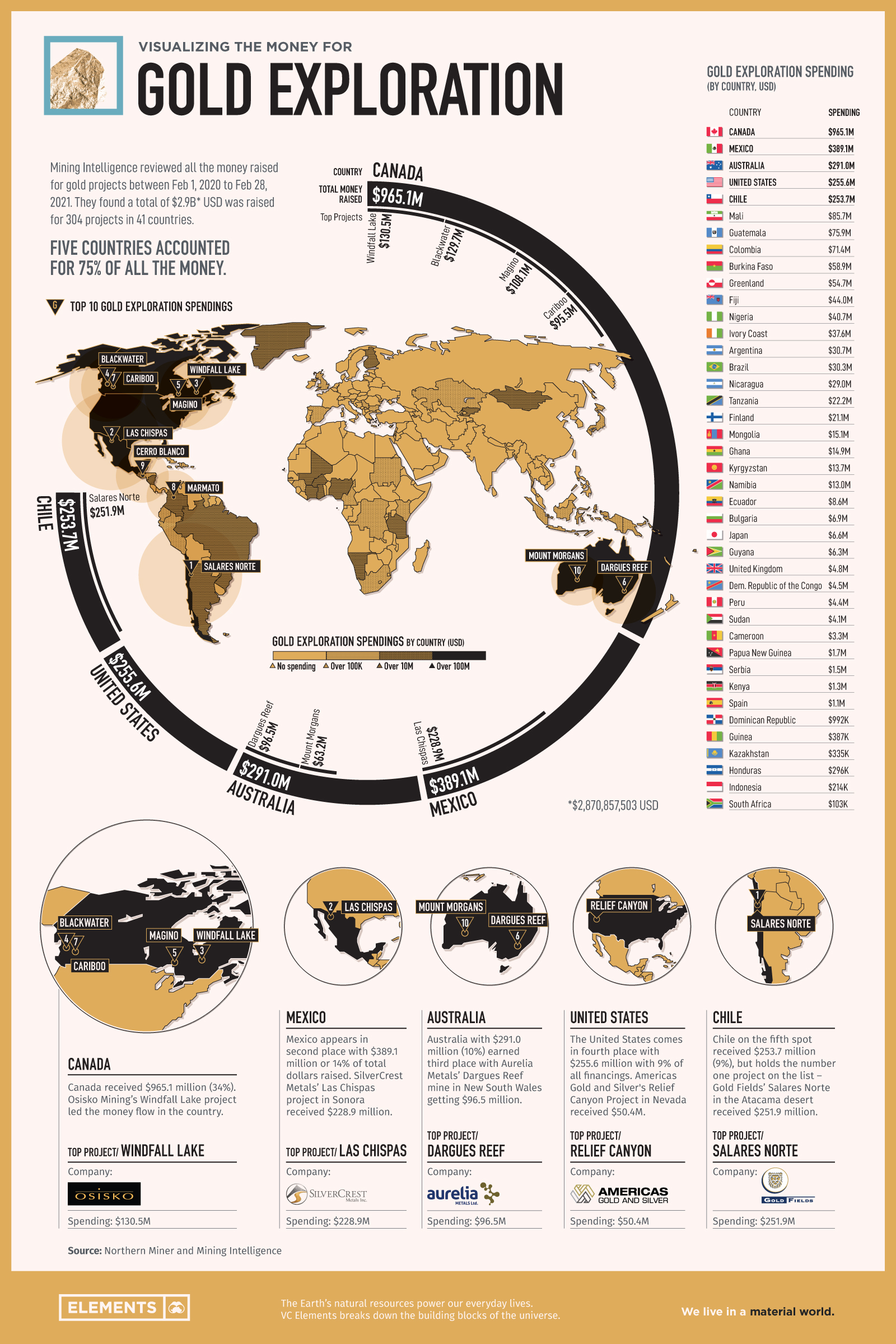 Visualizing the $2.9B Money Flow into Gold Exploration

In 2020, the price of gold reached multi-year highs, in part to the impact of COVID-19 shutdowns. This renewed interest in gold spurred the plans of many gold exploration and development projects around the world.

This infographic uses data from Mining Intelligence which tracked the $2.87 billion from 425 transactions for gold projects in 41 countries between February 1, 2020, and February 28, 2021.

Five countries accounted for 75% of the money raised for top gold projects around the world.

Canada attracted the most with $965 million or roughly 34% of all the money raised for gold exploration and development.

In second place, Mexico attracted $389 million or 14% of total exploration dollars raised while Australia with $291 million (10%) is in third place.

The United States comes in fourth place with $256 million or 9% of global gold exploration dollars. Chile on the fifth spot received $254 million (9%) with one project attracting the largest amount of any on the list.

Focusing on individual projects, Gold Fields’ Salares Norte project in Chile received $252 million for the largest financing of the period. The company started construction this year, after a delicate operation to remove endangered chinchillas from the site.

Gold is Canada’s most valuable mined mineral and the next 3 projects on the list show this priority. Osisko Mining’s Windfall Lake project in Quebec is third ($130 million), Artemis Gold’s Blackwater mine ($130 million) in British Columbia is the fourth, and Argonaut’s Magino project in Ontario ($108 million) the fifth.

The analysis found that more than half of the money raised (57%), went to 63 gold projects to advance economic studies – from scoping studies or preliminary economic assessments through to bankable feasibility studies and permitting.

A total of 71% of the projects were in the early stages of exploration, but they only accounted for about 25% of the total capital raised during the period.

With $2.9 billion in capital going into gold projects around the world, the gold industry has big plans. These financings represent opportunities for host countries’ economies and their workers, along with more gold for investors to buy.