The Romeo property (the “Property”) is situated in the prolific gold belt, the Abitibi Greenstone Belt. The government-maintained road R1053 crosses the Property. Romeo is located in the Belmont Township of Quebec. The nearest town is Lebel-sur-Quévillon (110 km to the west) while the gold mining city of Val d’Or is situated approximately 210 kilometres southwest of the Property. The Romeo property consists of 53 unpatented un-surveyed map designated mining claims totaling approximately 2,984 hectares. The claims are in good standing until April 12, 2023. There is a well-developed local road and trail network to access the Property. Refer to the figure 1, a base map of the Property. 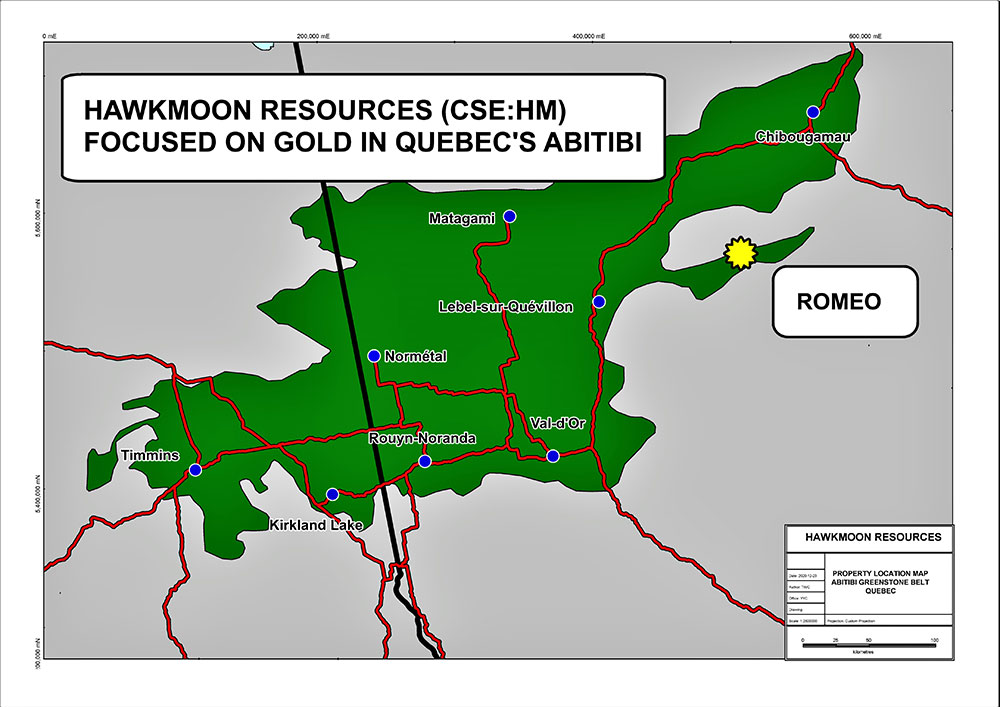 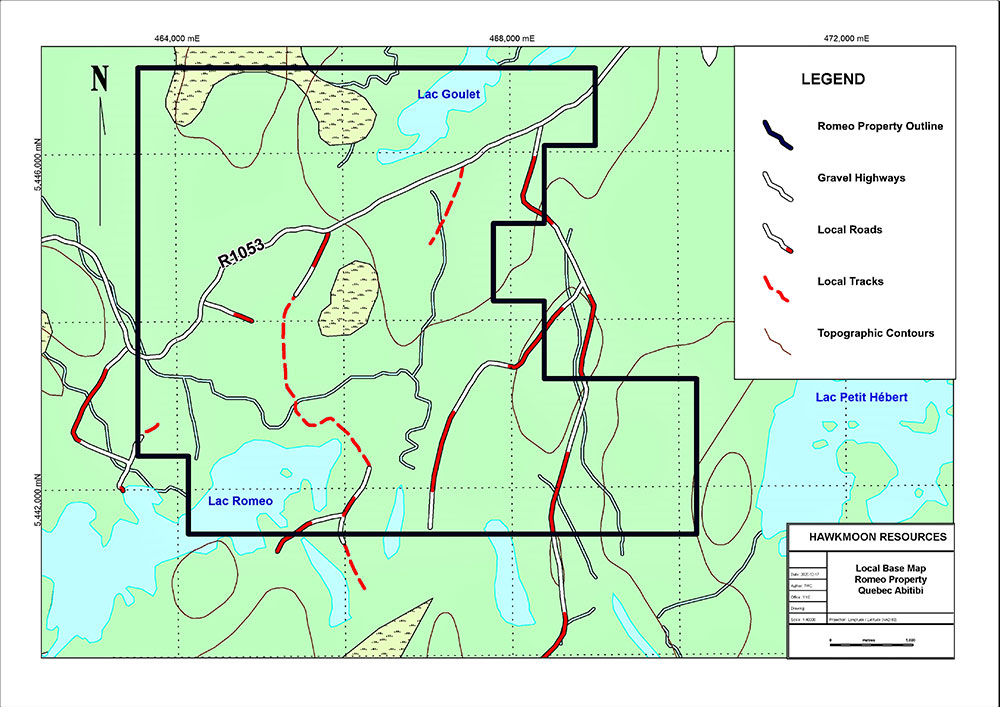 Figure 1: Base map of the Romeo Property

The Urban-Barry greenstone belt runs 135 kilometres east-west. Its north-south width ranges from 4 to 20 kilometres. The Urban-Barry is set within the northern volcanic zone of the Abitibi. Surrounding the Urban-Barry are the Father plutonic suite to the north, Grenville Province to the east, the Barry Complex of granitic and paragneiss to the south and to the west by the syn- to late-tectonic Corriveau and Souart plutons.

Geology Of The Romeo Property

The bedrock geology is composed primarily of intrusive rocks with local amounts of volcanic and metamorphic rocks. The intrusive rocks of most interest are diorite. Refer to figure 3 for a geological map of the Romeo property. It appears the Bank Fault as identified by Osisko Mining crosses the Romeo Property in this pegmatitic granite. Osisko Mining has suggested the Bank Fault is a regional scale fault on the same scale as the Porcupine-Destor and Larder Lake – Cadillac Faults in their corporate presentation in July, 2019. The 2020 work program completed by Hawkmoon appears to have identified a surficial expression of the Bank Fault at the “Fourty Foot Shear” outcrop. 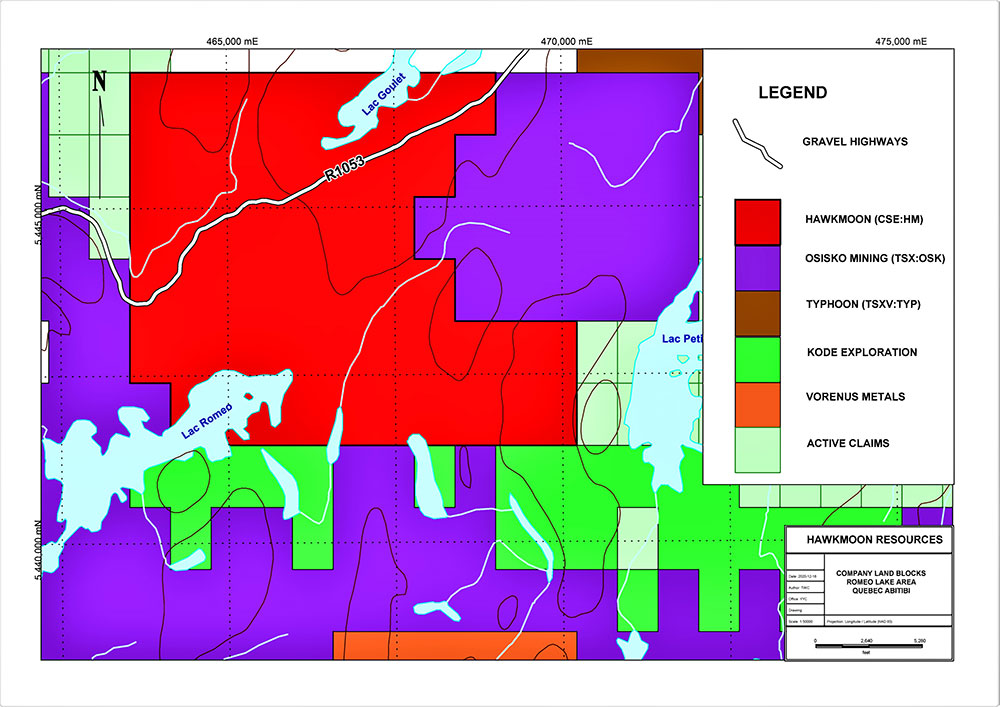 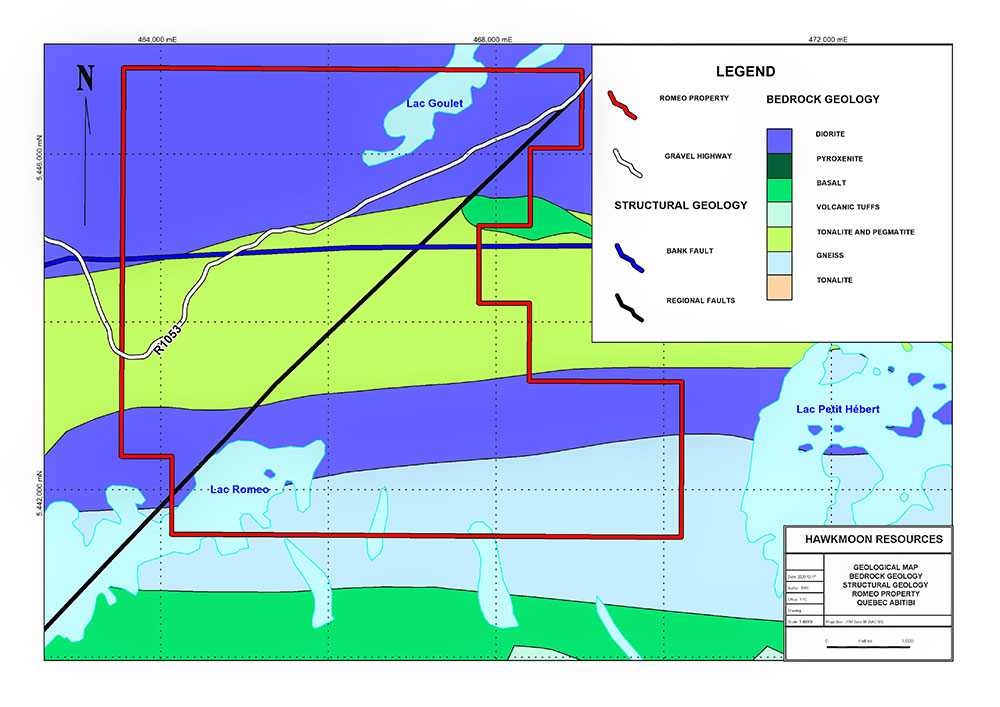 Work Completed On The Romeo Property

A total of $157,000 has been spent on the Romeo Property to date in three phases of work. This work is outlined below.

In 2019, Hawkmoon completed an initial work program as a follow up of the 2017 Heliborne survey. Of most interest was to find each of the main TDEM anomalies. A local electromagnetic (“EM”) and total magnetic response was completed over these primary anomalies. Also necessary was to map out local access roads and to prospect available outcrops. All anomalies were observed and some had a notable EM response, particularly in the southwestern and central portions of the Property. Of interest was finding an outcrop of interest just east of the Property in the east-central portion of Romeo. Refer to figures 5 and 6. 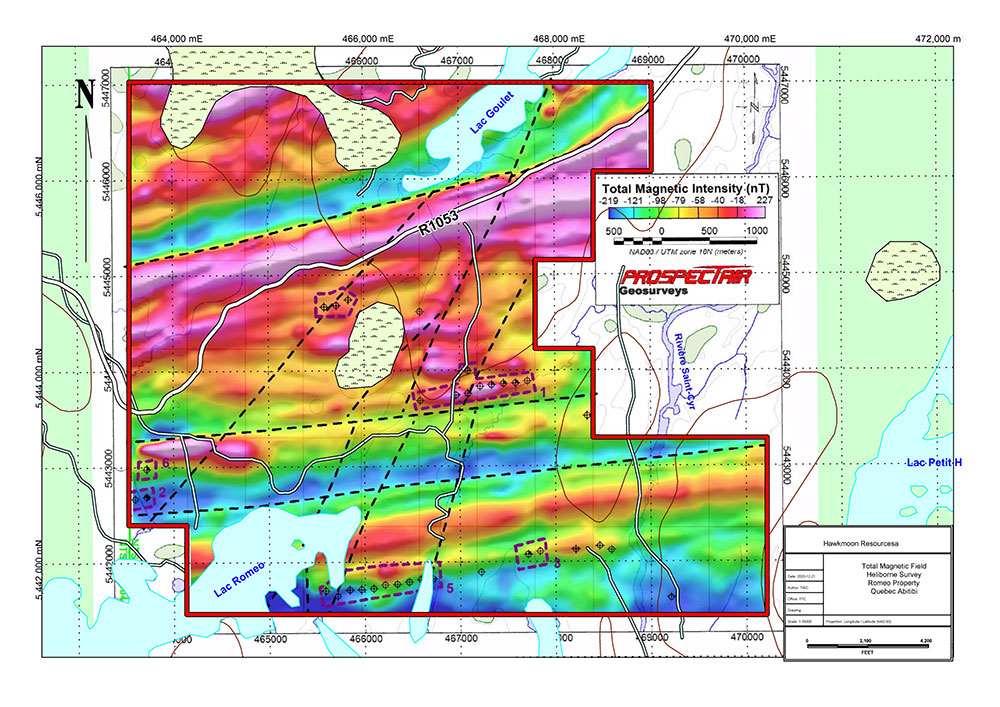 FIGURE 4: Magnetic and TDEM map of the Romeo Property 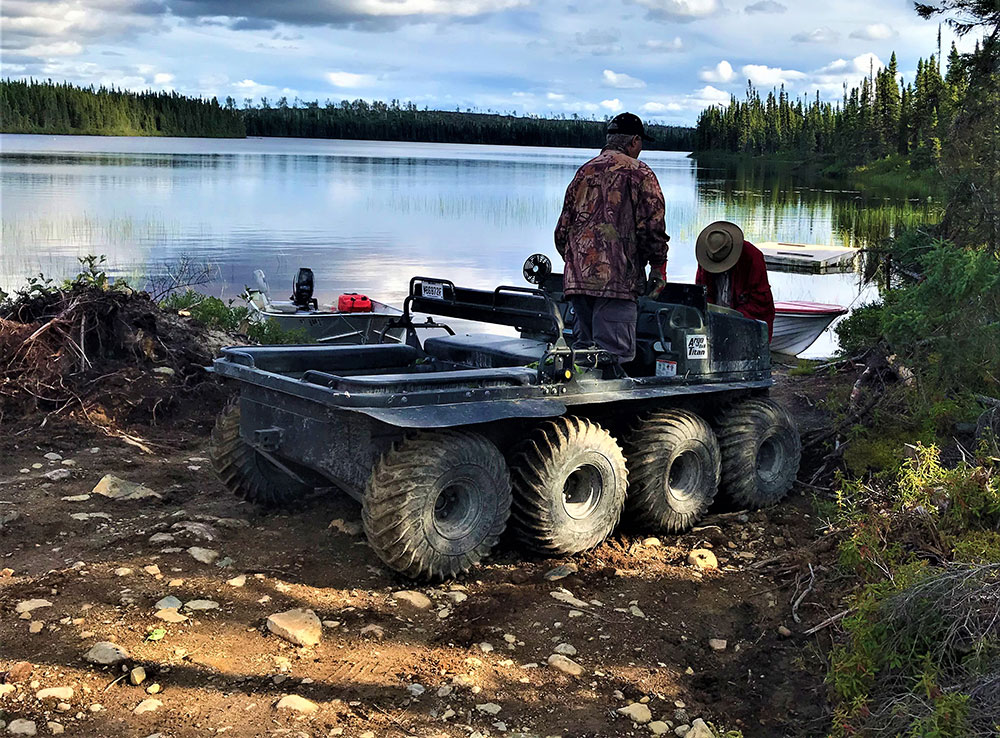 Figure 5: At the shore of Lac Romeo 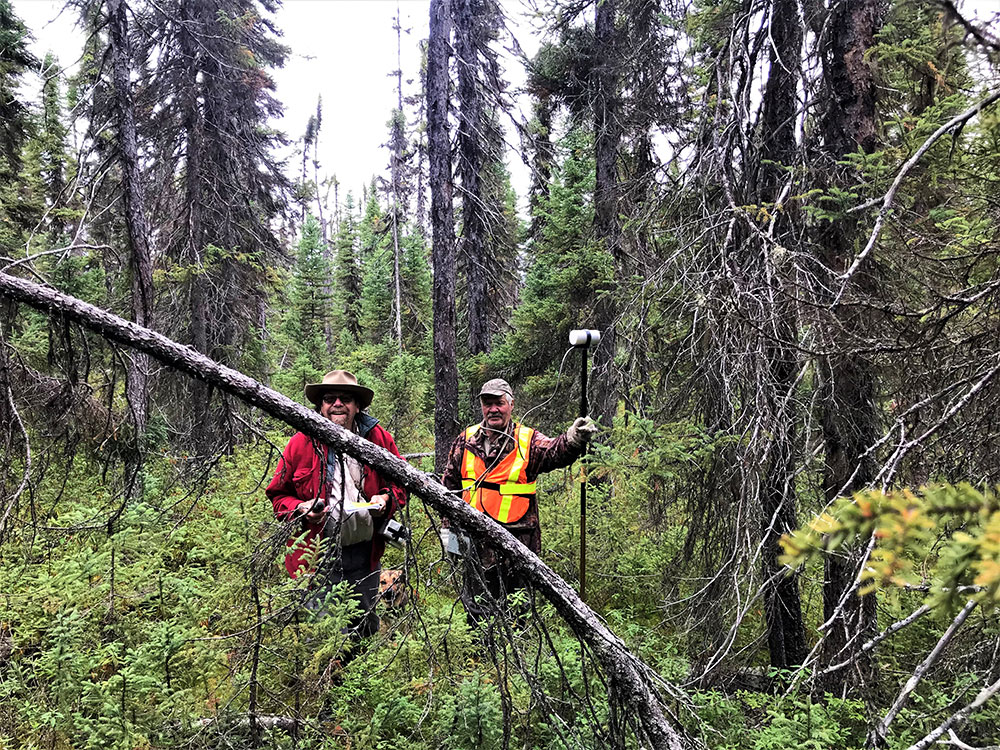 In August of 2020, Hawkmoon completed a second work program at Romeo. Work was focused on two areas of the Property. The first of these was sampling the A and C soil horizons in the southwestern part of Romeo. Secondly, with an excavator Hawkmoon stripped outcrops in the east-central part of the Property as a follow up on the outcrop of interest observed in 2019. Refer to Figure 7 showing an excavator digging pits and figure 8 showing the locations of excavator pit soil sampling targeting the “C” horizon. 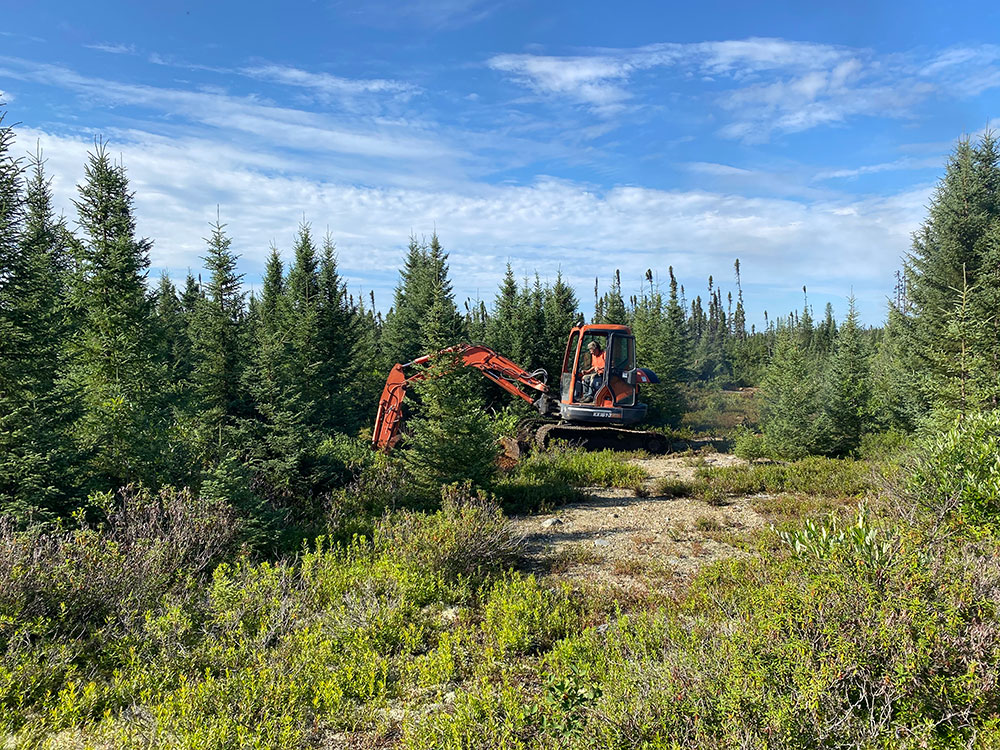 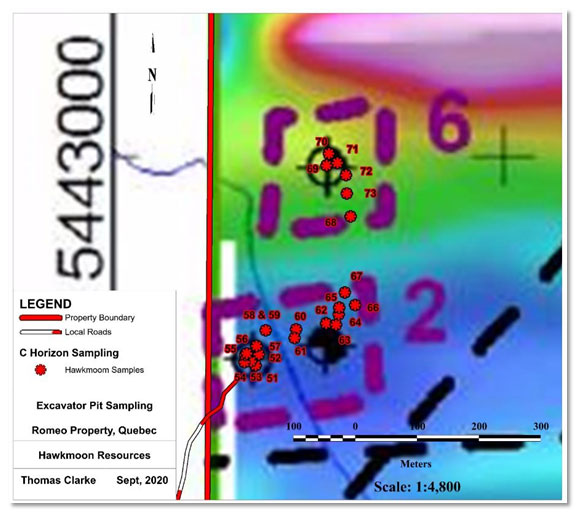 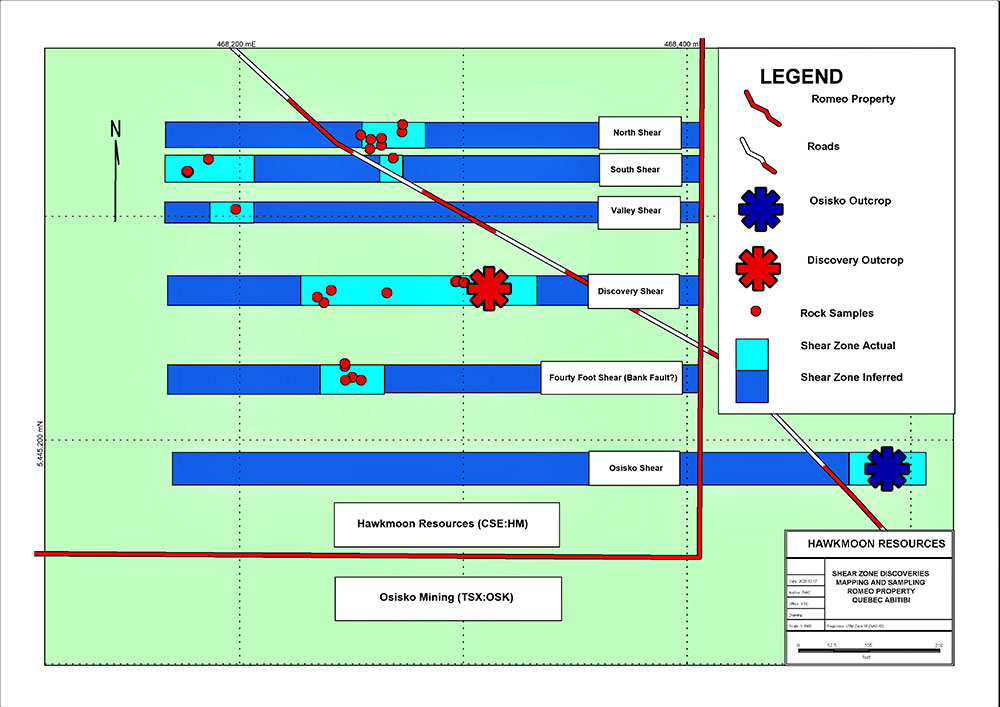 Figure 9: Map of the shear zones discovered on Romeo 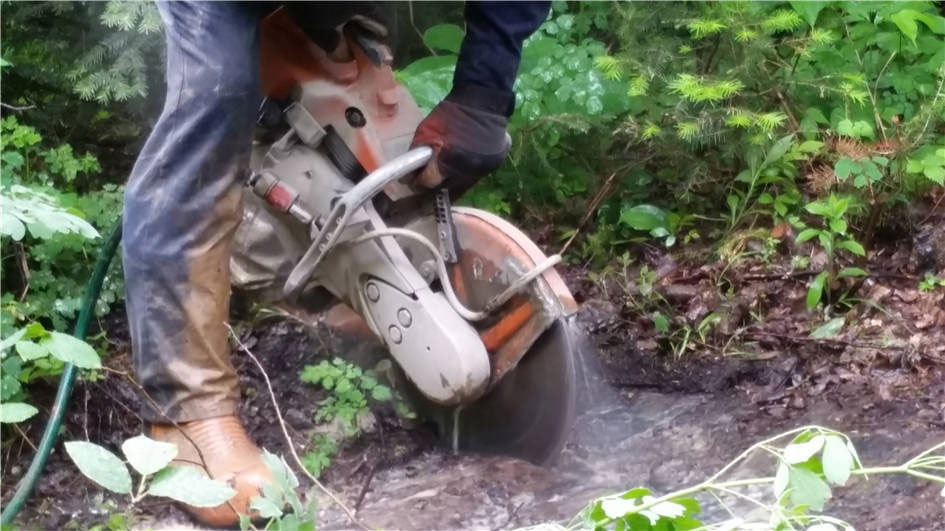 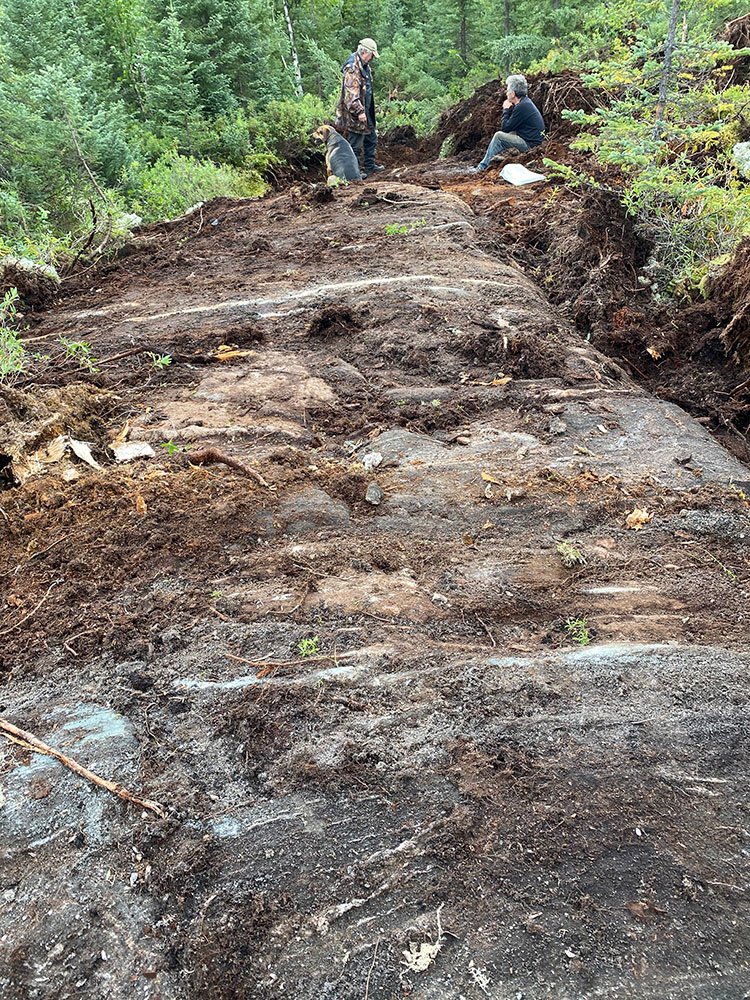 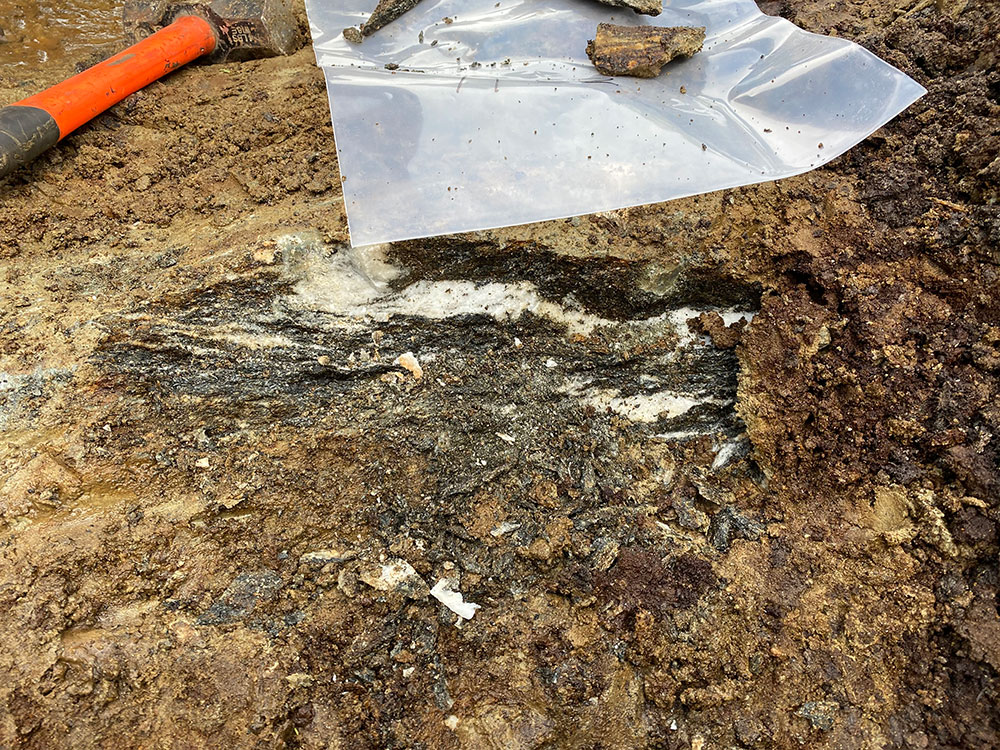 Figure 12: Outcrop in a trench 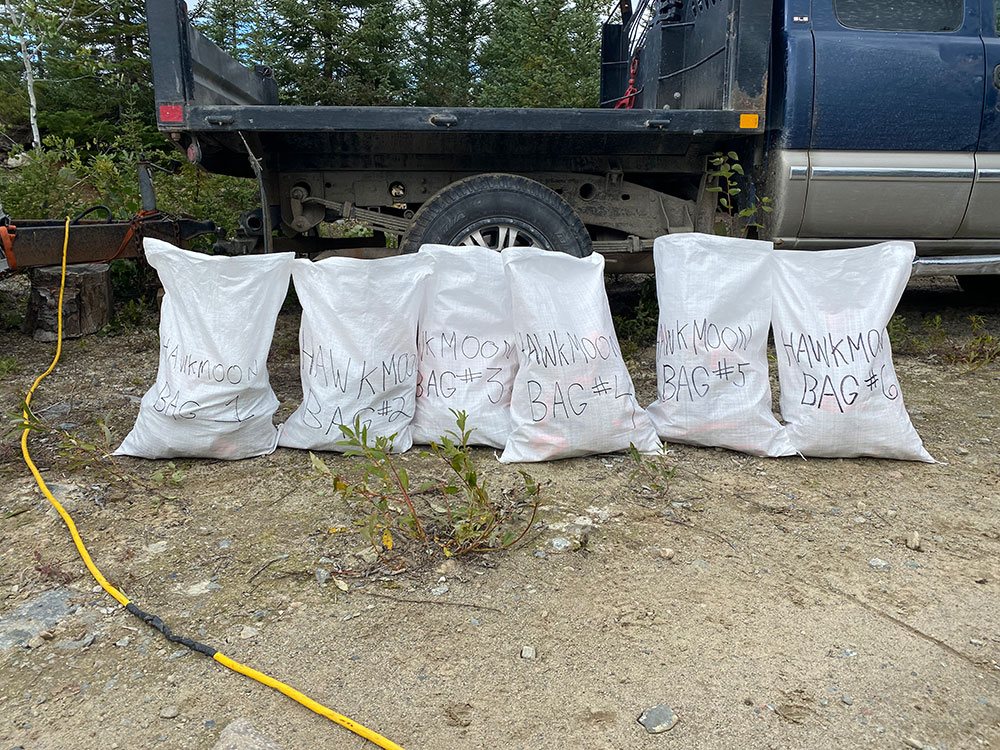