VANCOUVER, British Columbia–(BUSINESS WIRE)–Hawkmoon Resources Corp. (CSE:HM; OTCQB:HWKRF; FSE:966) (“Hawkmoon” or the “Company”) is pleased to announce that it has commenced drilling on its Wilson Gold Property (“Wilson” or the “Property”). The Property is situated approximately fifteen kilometres east of the town of Lebel-sur-Quévillon, in the Abitibi Greenstone Belt of Québec. Hawkmoon has planned a total of 3,000 metres across ten drill holes (the “Drill Program”) on Wilson. The Company has engaged Faubert et Fils to carry out the Drill Program. Faubert et Fils have mobilized to the site and are preparing to collar the first hole. Hawkmoon anticipates drilling in the areas as outlined in Table 1. 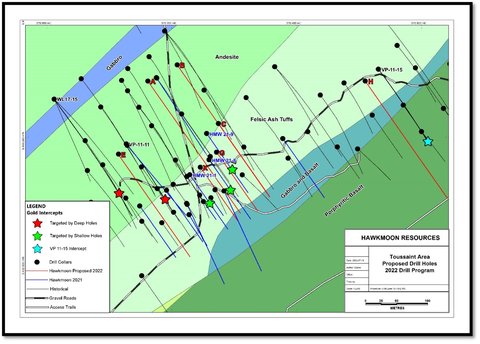 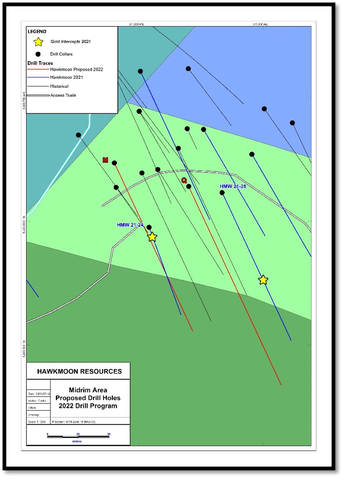 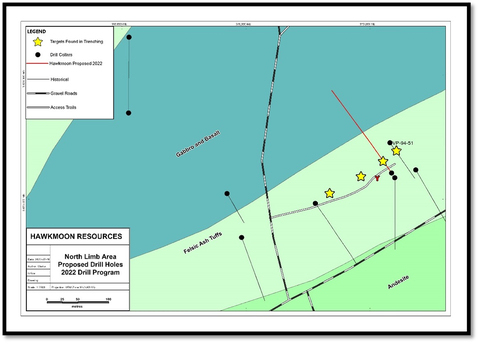 Table 1: Details of the Drill Program

Hawkmoon plans to drill three (3) deeper (step out) holes (350 to 400 metres each) at the Toussaint and three (3) shallower (infill) holes (150 to 250 metres each). Refer to figure 1 for an outline of the various proposed drill holes, historical holes and drill targets.

The final deep hole (“B”) proposed for the Toussaint has two goals. The first is testing the deeper gold mineralisation further to the East and to the second is drilling underneath the shallower hole planned to extend HMW 21-09 eastwards.

Hawkmoon has planned one (1) hole of 400 metres deep (“H”). This hole aims to test and deepen a historical intercept of 4.0m @ 7.80 g/t gold including 1.0 metres @ 21.4 g/t in VP 11-15. This old hole nearly ended in positive mineralization. As a result, Hawkmoon anticipates drilling about 40 metres southwest of this hole as well as deeper to test the potential of this zone as shown in Figure 1.

Hawkmoon intends to drill one (1) hole in a new area, the North Limb (“Y”), as seen in Figure 3. This drill hole is a result of Hawkmoon’s successful trenching program earlier in July. In that program, Hawkmoon traced a sheared, altered and locally brecciated volcanic tuff for approximately 300 metres along strike. The drilling will be in the vicinity of a previously drilled intercept in hole VP 94-51 (1.0m @ 8.95ppm g/t gold). The Company will be drilling to the Northeast to target two gold targets and to drill approximately 100 metres laterally from the mapped volcanics – gabbro contact.

Branden Haynes, President of Hawkmoon, states “July is the start of our summer work season, and the Company is looking forward to positive results. The objective of the Trenching Program is to extend a historical gold zone, aiming to dig around the contact between the volcanics and gabbro and examine a series of IP anomalies with a favourable signature.”

Hawkmoon is focused entirely on its two Quebec gold projects. Wilson Gold Project is located in one of the world’s largest gold endowed areas, the Abitibi Greenstone Belt. The Wilson is accessed by government-maintained roads and is in close proximity to the east of the town of Lebel-sur-Quévillon. The second project is situated in the Belleterre Gold Camp southwest of Val-d’Or. For more information, review the Company’s filings available at www.sedar.com.